Lately, more and more workplaces have been providing free snacks and meals to their employees. Besides providing sustenance and cutting down on the number of hours employees need to buy or prepare food in their off time, complimentary food also improves employees’ moods. But do different company departments have different tastes in snacks? And furthermore, what kind of snacks do employees actually like?

Our company, oh my green, is in the business of selling snacks to companies across the US. We’ve collected reviews since August 2014 on each snack sold, and categorized it based on what role the employee reviewer holds at their job. We were curious, which snacks were the highest rated? And how do these ratings vary by department?

We found that fruits and vegetables are often the highest rated snacks, whereas bread and cereal products are frequently given poor reviews. Specifically, blueberries, blackberries, avocados, and peaches are all in the best reviewed snacks. Whereas pretzels, sprouted cereal, and some brands of bread were some of the worst rated items.

Snacks such as vegan cream cheese divided the reviewers entirely, it is loved by 50% of the population but strongly disliked by the other half. Employees in Finance roles tend to be picky about their snacks, and especially don’t like desserts. On the other hand, Business Development and R&D employees are very satisfied with their office food choices. IT workers aren’t as choosy, they rated both healthy snacks and sweets quite highly.

We first wanted to analyze which office snacks were the most beloved. Do employees prefer vegetables or desserts? 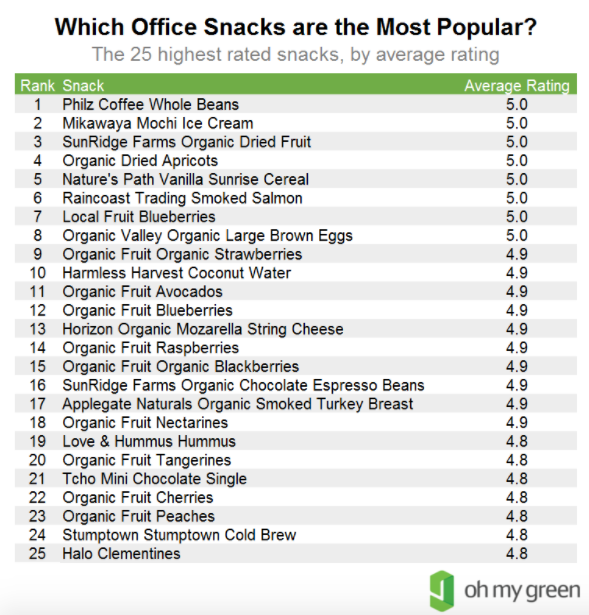 Snacks that are rated the most highly range from coffee beans to hummus to turkey breast. However a few snacks are reoccurring favorites. Coffee and coffee beans appear three times in the top 25 most popular snacks. Not surprising given how much office workers love caffeine! Additionally, more than half of the top 25 snacks are fruits or veggies! Including dried fruit, 13 produce snacks made the list of the highest ranked office treats. Organic food was an overall favorite, 15 of the 25 most loved snacks are marked as organic.

Given that fruits and vegetables are some of the best reviewed office snacks, we wondered which ones are rated the lowest? 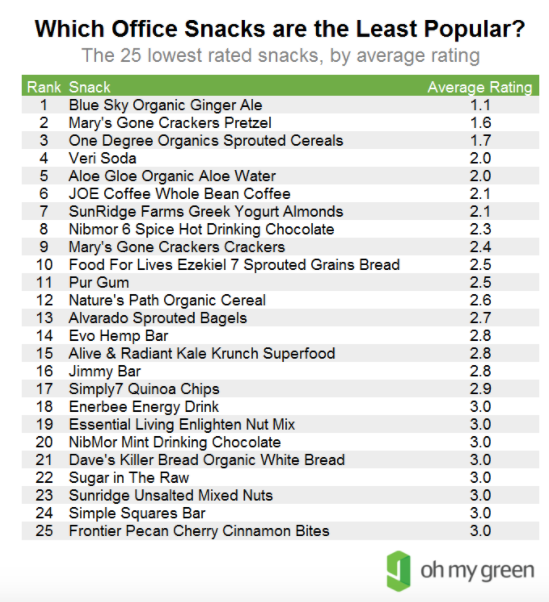 Not all snacks received glowing 5-star reviews. Some brands of ginger ale, pretzels, and sprouted cereal all received average ratings of less than 2.0. On the other hand, not a single fruit or veggie ranked in the bottom 25! More common food types that received poor ratings were bread products; sprouted grains bread, sprouted bagels, and organic white bread all had fairly negative reviews. Interestingly, one coffee product is on the lowest rated snacks list, whereas we saw many high ratings for other coffee brands in the top 25 list.

Next we segmented all the snacks in our database into 15 distinct categories and examined which were the best rated types of snacks. 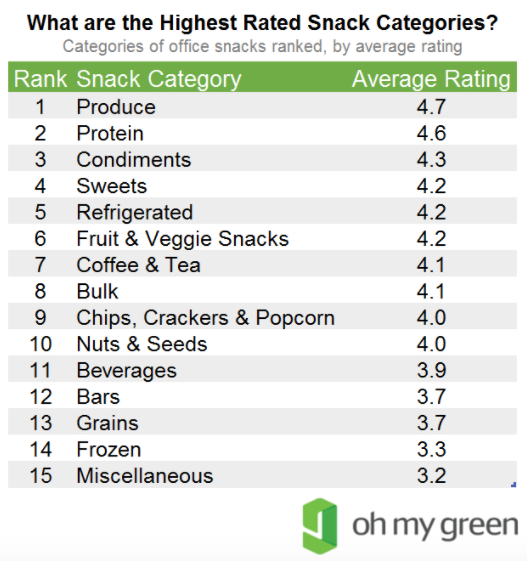 Similar to what we saw in our top 25 list, produce ranks the highest out of all the snack categories. The second most popular type of snack was protein, which includes treats such fresh ham and turkey. Near the bottom of the list was grains (as we saw in our bottom 25 list), frozen foods and miscellaneous. 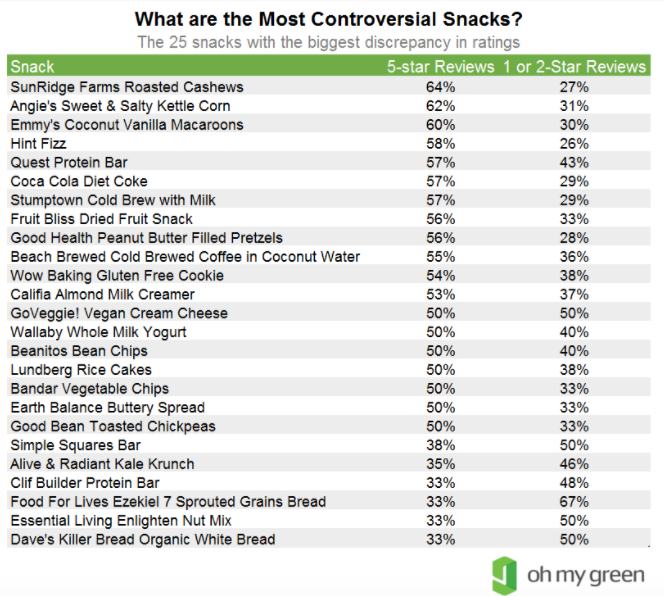 Who knew Diet Coke was such a controversial beverage? Over half of the reviewers give Diet Coke a 5-star review, but almost a third think it’s only worth of 1 or 2 stars. Perhaps the most divided snack in the rankings is “GoVeggie! Vegan Cream Cheese”. Not a single reviewer ranked it as a 3 or a 4-star product! Exactly half of the reviews were a perfect 5-stars and the other half were a dismal 1 or 2-stars.

After looking at the snack reviews as a whole, we broke them out by job function. We categorized the reviewers into 15 unique professional departments and looked at average snack rating by department. 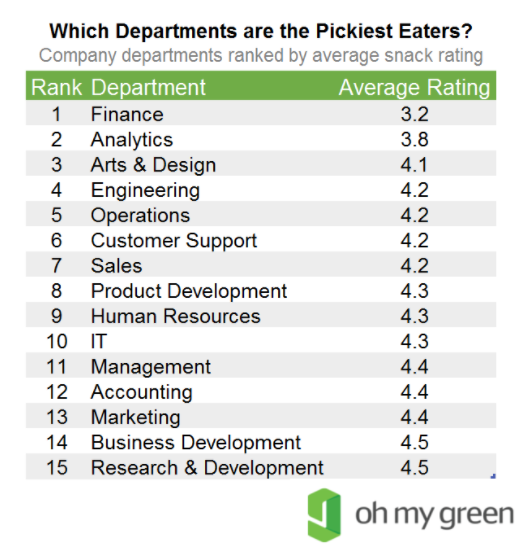 People working in Finance and Analytics were by far the harshest critics when it comes to their office snacks; these two departments were the only ones whose average ratings fell below a 4.0 for all snacks overall. On the other hand, employees in Business Development and Research and Development were much more forgiving in their reviews, both departments gave an average snack rating of 4.5. Are Finance employees pickier eaters than people in R&D? Or do R&D departments have better snacks?

We wanted to see if preferences for certain types of food varied by department. First we analyzed average rating by department for “healthy” snacks, which we categorized as produce, fruit and veggie snacks. 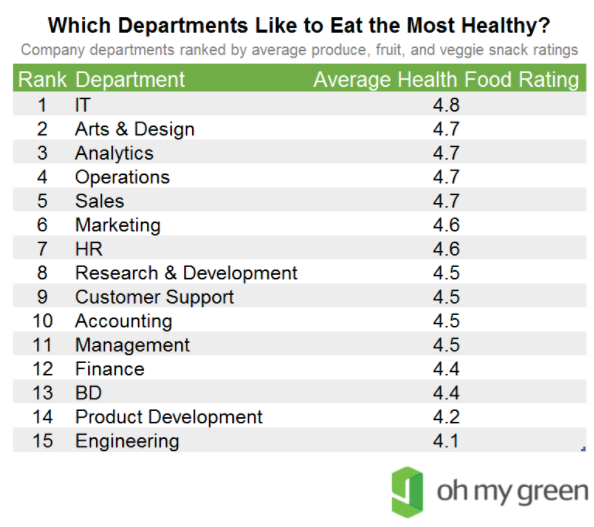 People who work in IT seem to like the healthy snacks the most. Their department’s average rating for produce and fruit and veggie snacks was the highest at 4.8. Additionally employees in Arts and Design, Analytics, Operations, and Sales all ranked healthy snacks highly with an average score of 4.7. On the flip side it would appear that Engineers do not care as much for nutritious snacking. They rated the healthy food the lowest, with an average score of 4.1.

Finally, we wanted to know who favors sweets the most. We looked at each department’s ratings of all snacks in the “sweets” category. 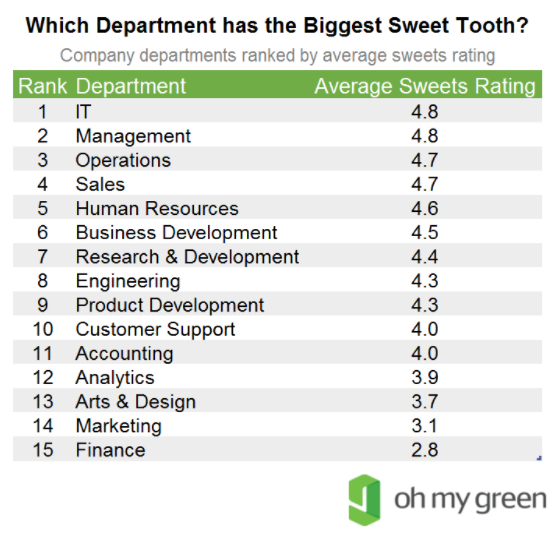 IT employees love to eat healthy snacks but they also have a sweet tooth! Management and IT were the two departments with the best sugary snack reviews with an average rating of 4.8. We saw that Finance workers gave some of the lowest reviews overall, and it looks like a lot of those negative ratings were directed in the desserts category. The Finance department has an average sweets rating of 2.8 which is two full points lower than the dessert loving departments at the top of the list.

It’s no surprise that employees love to eat, especially when the food is paid for by their company. Overall, healthy food such as fruits and vegetables are well received in the workplace, especially by those in IT, Arts and Design, Analytics, Operations, and Sales. While some sweets are popular too, departments such as Finance and Marketing aren’t as thrilled with the dessert options in their office.