America is a nation of snackers. Ninety-four percent of Americans report snacking at least once per day, and 50% say they snack two to three times per day. In the workplace, millions of workers rely on their employers’ snack arsenal to get them through the day.

But what exactly are workers snacking on?

At Oh My Green, we merchandise and sell hundreds of healthy, delicious snacks to companies across the country. We’ve collected sales data on each brand and every individual snack we provide. Which snacks have increased the most in popularity in the workplace in the past year? Which have fallen out of favor? And where does the market seem to be heading?

We found that organic-branded items, protein-based snacks, and sparkling water (particularly LaCroix) are hot commodities in the workplace, while energy-branded products and less healthy options (sodas, chips) have declined.

Snacks in the Workplace: A Snapshot

Before we get into the more granular data, let’s take a look at the most popular snacks we sell, as well as those which have seen the largest increase and decrease in sales in the past year. Our data covers a year-long period, from March 2016 to March 2017, and the numbers below represent each item’s percentage of our overall snack sales.

As of March 2017, the “snack” which holds the largest share of our overall sales is LaCroix brand flavored sparkling water, at 3.7%. This is closely followed by another sparkling water brand, Hint (2.3%). LaCroix’s unflavored version (1%) also cracks the top 20. 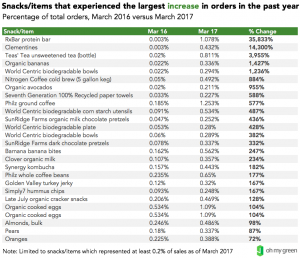 Between March 2016 and 2017, RxBar protein bars experienced a sizable increase in sales, jumping from virtually 0% to over 1%.

This list is abound with “organic” products, as well as biodegradable plates, bowls, and utensils (which we also sell). Increasingly, companies seem to be opting for products that are healthy and eco-friendly. 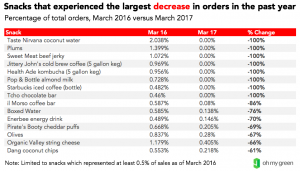 What American Workers Are Snacking On

Next, let’s take a closer look at some of these trends, starting with beverages.

We went through our data and consolidated snacks into categories (ie. “coffee” = all Starbucks, Philz, Verve, etc. products). Let’s start with how beverages stack up. 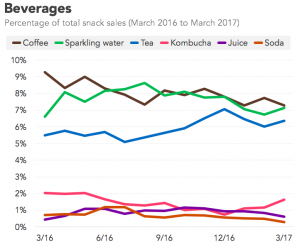 No office beverage is more quintessential than coffee — and of course, it takes the top spot among all beverages, representing 7.3% of all snack sales. That far outranks the niche industry of kombucha (1.6%), and the less healthy markets of juice (0.6%), and soda (0.3%).

Among coffee brands, Philz reigns supreme, with 2.3% of all sales (about one-third of coffee sales) through Oh My Green. Verve experienced quite a surge this year, while Tico products tanked. 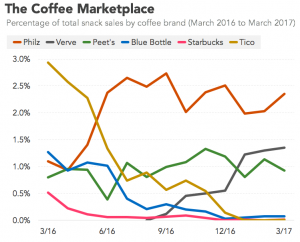 But at 7.1% of sales, sparkling water — which we mentioned earlier — seems poised to soon surpass coffee. This is mostly thanks to LaCroix, which experienced something of a renaissance in 2016. 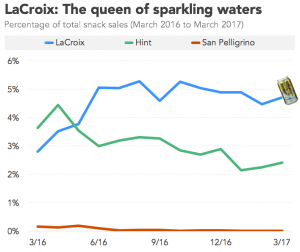 Moving to foods, the fresh produce market seemed quite lively in the workplace in 2016.

In this sphere, avocados are the snack of choice, followed distantly by blueberries, apples, and bananas. Evidently, 2016 was not a good year for plums: they dropped off the face of the workplace snack ecosystem in March, and nobody has heard from them since. 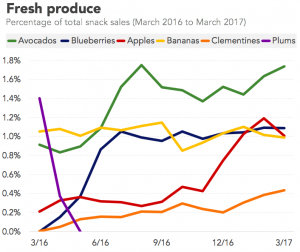 One of the more popular office snack options is a bag of chips, in any variety: potato, corn, veggie, or bean-based. The classic potato chip (2% total sales) is still the most-purchased of these — though veggie- and fruit-based chips are not far behind. The two seem to share something of a converse relationship. 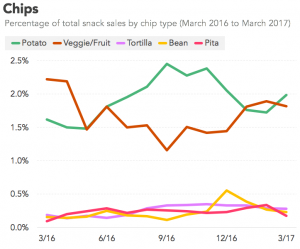 Another popular submarket in office snacks is the bar, which often promises high nutrients, energy, and protein packed into a single, tiny lump of chewiness. 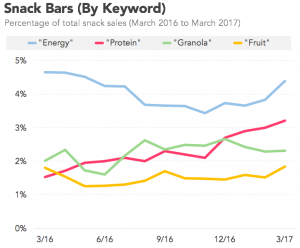 “Energy” branded bars (like Clif) continue to be the most popular in the workplace. But in the past year, they’ve experienced a bit of a decline. 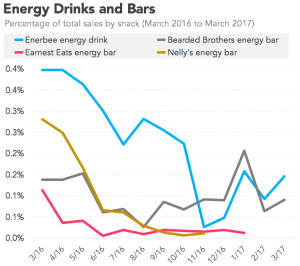 Bars advertised as high-protein have seemed to fare a bit better — especially the RxBar brand, which experienced a massive 35,000% surge in sales growth this past year. 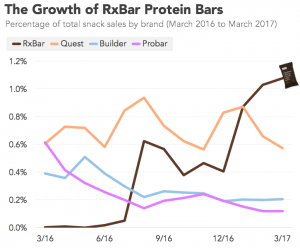 Other protein-based snacks have performed similarly well since March of last year.

Nuts, beloved by at-desk snackers for their ease and mess-free consumability, have always been a popular office snack offering. But one nut in particular has outshined the rest: the almond. 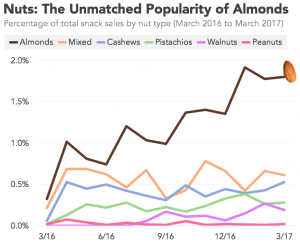 Almonds of various brands and offerings (chocolate-covered, yogurt-covered, salted, unsalted) have experienced a combined 458% growth in sales in the past year, putting mixed varieties, cashews, pistachios, walnuts, and peanuts to shame.

High-protein dairy products have also seen growth across the board. 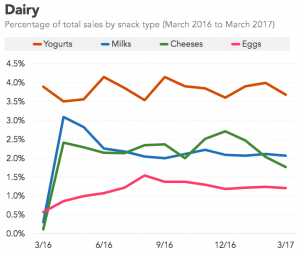 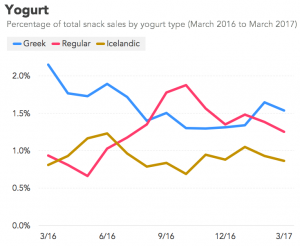